In this FAQ here are some of the most common questions and answers asked, some more silently than others, about OpenUserJS.org.

Q: With markdown why does my quoted text merge with my response?

A: Place two line breaks in between your quote and reply like this:

Something to be quoted

This is my reply

Something to be quoted
This is my reply

Q: How do I ensure the correct syntax highlighting of my code snippets?

A: Use markdown like these with named code fences:

The smaller the code snippet, or having a flawed Code snippet, the more likely it will automatically pick the wrong highlighting with unnamed code fences, or worse no highlighting... so it is best to recommend coercing a snippet to the correct type.

Q: What is a good way to present a Code change to an Author?

Take for example a simple RFC 2606§3 - Hello, World! script. Fixing any changes to the file.changed you could present the difference with a snippet in a code fence of type diff which renders like this:

You should, at the very least, use a pair of markdown back ticks, e.g. `, around the Code change to ensure proper visibility especially if there is HTML present which normally gets sanitized and possibly rendered. Named Code fences allow for greater visual improvement and understanding.

Q: Why does my script source have so many warning triangle notices?

A: This is not quickly answered but here are some tips for a more effective presentation of your script and perhaps a larger user usage pool, i.e. more installs and less issues encountered.

Currently the editor that is used for writing scripts online is called Ace. It currently has a sub-dependency linter called JSHint. By default this linter makes some advisory notices typically in the gutter of the Script Source Code page with the the exclamation triangle icon (⚠) next to the clickable line number. If hovered over it usually shows what the notice is. An author does have some control over what is shown depending on the version of this linter in use by the dependency and what options are chosen.

For an example we will pick the default, stock, jQuery example:

... usually you will see a warning triangle notice anywhere you use $ or jQuery since they are considered globals to the .user.js and not usually directly declared in your script. They are usually defined with the // @require https://code.jquery.com/jquery-latest.js line in the UserScript metadata block and referenced in multiple places in your code. You might also be using a sites jQuery only in the DOM which is also in the globals space if you do not have jQuery required by the .user.js engine. This can be detrimental if the site stops using jQuery so it is best to declare at least a matching expected jQuery version with @require and use this.$ = this.jQuery = jQuery.noConflict(true);.

In order to minimize the occurence of these, and speed up the page load for you and your users, you may insert near the top of the file, before any code, the following diff lines, tailored to your needs: 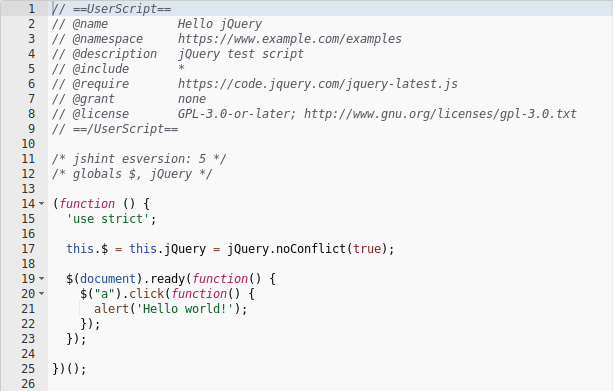 Not all notices may go away with this diff change but a large number of this particular, widely used, library framework identifier (variable) do silence. Additionally the possible strict violation notice is quelled by using an IIFE with a function level strict mode to protect your source from other DOM manipulation/detection, accidental or otherwise. Some warning notices are informational such as missing semicolons. While this is a highly volatile subject, and quite subjective, pick one and stick with it throughout your script. Some notices, of course, are actual errors. Use your best judgment.

Q: Does OpenUserJS.org have meta?

A: Yes, use the meta routine.

The username and scriptname "folders" are usually specially formattted and can be URIComponent encoded depending on the Unicode usage with name in the UserScript metadata block. This formatting can sometimes be referred to as a "slug" but usually those types of urls are not URI or URIComponent encoded and are strict ANSI. See the href attribute (usually copy link, or similar, in a right click context menu) on the blue Install button for the current encoding for the values on a Userscripts home page.

A Userscript Unit Test is available to demonstrate and test these features at oujs - Meta View for a graphical representation of these meta routines.

Q: Is there a way to not count script updates with this sites install counter?

A: Yes, use the raw source route like this in the UserScript metadata block:

Donate for the site OpenUserJS

Are you sure you want to go to an external site to donate a monetary value?

WARNING: Some countries laws may supersede the payment processors policy such as the GDPR and PayPal. While it is highly appreciated to donate, please check with your countries privacy and identity laws regarding privacy of information first. Use at your utmost discretion.
Donate